Spirits of Resistance and Capitalist Discipline: Factory Women in Malaysia 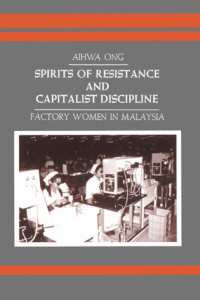 Spirits of Resistance and Capitalist Discipline: Factory Women in Malaysia

Why are Malay women workers periodically seized by spirit possession on the shopfloors of modern factories? In this book, Aihwa Ong captures the disruptions, conflicts, and ambivalences in the lives of Malay women and their families as they make the transition from peasant society to industrial production.

To discover the meaning that the market economy and wage labor hold for Malay peasants, Ong conducted anthropological field work in an agricultural district in Selangor, Peninsular Malaysia, which is undergoing rapid proletarianization. Weaving together history, ethnography, and quantitative analysis, she addresses many questions pertaining to peasants and state policies. The book shows how the diverging roles of young men and women are increasingly channelled, by educational and labor market pressures, toward conformity with corporate culture and capitalist discipline.

A unique feature of this book is the portrayal of Malay women workers in Japanese factories, caught between their culture and the culture of capitalism. Ong argues that cultural values and practices--both Islamic-Malay and foreign--are reworked and reconstituted in the industrial hierarchy. Her vivid accounts of hysterical episodes, violent incidents, and women's self-perceptions provide insights into their attitudes toward capitalist relations.

By illuminating the encounter of Malay peasants with global industrial production, the book also throws light on the attitude of neophyte wage workers elsewhere in the Third World.