Multiculturalism in the New Japan: Crossing the Boundaries Within 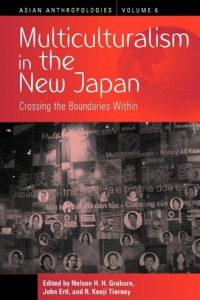 Multiculturalism in the New Japan: Crossing the Boundaries Within

“…a valuable addition to the increasing literature on Japanese multiculturalism which has challenged the long-held homogeneous Japan thesis…A particular contribution of this … book is to illuminate the ground-level process where hybridities emerge and group boundaries are redrawn in a particular local context…I greatly enjoyed reading [this book] from beginning to end. My undergraduate students who encountered it in their subject reading list also enjoyed it. I would recommend it highly for both undergraduate and graduate students studying Japanese society." · Japan Studies

“This book importantly seeks out the meanings behind the nooks and crannies in which peoples from different cultures are juxtaposed within Japan. However the real work of living side by side, of respecting individual and cultural differences, of embracing diversity…remains a vital challenge to both Japan, as well as to scholars who stand poised to connect the dots of this critical and evolving picture. I recommend this volume as one further step toward that undertaking.” · Asia Pacific World “…a very readable volume offering through its focus on the local a vivid picture of multiculturalism in Japan. All articles are ethnographically grounded and it is here, and not in systematic and theoretically exhaustive treatment of the subject of multiculturalism.” · Zeitschrift für Ethnologie

Like other industrial nations, Japan is experiencing its own forms of, and problems with, internationalization and multiculturalism. This volume focuses on several aspects of this process and examines the immigrant minorities as well as their Japanese recipient communities. Multiculturalism is considered broadly, and includes topics often neglected in other works, such as: religious pluralism, domestic and international tourism, political regionalism and decentralization, sports, business styles in the post-Bubble era, and the education of immigrant minorities.

Nelson H. Graburn was educated in Natural Sciences and Anthropology at Cambridge, McGill, and the University of Chicago. He has carried out ethnographic research with the Inuit of Northern Canada since 1959, and in Japan since 1974. He has taught at the University of California, Berkeley, since 1964, with visiting appointments at the National Museum of Civilization, Ottawa; Le Centre des Hautes Etudes Touristiques, Aix-en-Provence; the National Museum of Ethnology (Minpaku) in Osaka; and the Research Center for Korean Studies, Kyushu National University, Fukuoka. His recent research has focused on the study of art, tourism, museums, and the expression and representation of identity.

John Ertl is a doctoral candidate in Anthropology at the University of California, Berkeley. He worked on the JET program in Tochigi Prefecture for two years. He was a visiting scholar at the University of Tokyo and spent a year conducting his dissertation research in Noto Peninsula. His research interests include social reproduction and change, traditionalism, place making, urban planning, and local government in Japan.

R. Kenji Tierney earned his Ph.D. at the University of California, Berkeley (2002). After a Reischauer Postdoctoral Fellowship at Harvard University and ExEAS Fellowship at the Weatherhead Institute, Columbia University, he has taught at Union College, Schenectady, New York, since 2004. He has taught courses on Japan and East Asia, Africa, food, space, and place; he specializes in historical and symbolic anthropology.