Learning How to Ask 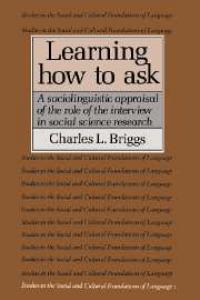 Learning How to Ask

Charles L. Briggs
PUBLICATION DATE: July 19th, 1986
ISBN-10: 9780521311137
Interviews are ubiquitous in modern society, and they play a crucial role in social scientific research. But, as Charles Briggs convincingly argues in this book, received interviewing techniques rest on fundamental misapprehensions about the nature both of the interview as a communicative event, and of the nature of the data that it produces. Furthermore, interviewers rarely examine the compatibility of interviews as a means of acquiring information to one another. These oversights often blind interviewers to ensuing errors of interpretation, as well as to the limitations of the interview as a means of acquiring data. To conflict these problems, Professor Briggs presents an analysis of the 'communicative blunders' that he himself committed in conducting research interviews among Spanish-speakers in northern New Mexico. By focusing on these errors and exploring how they may be avoided, he is able to propose new techniques for designing, implementing, and analyzing interview-based research. These rest on identifying the subjects' resources for conveying information, and the relative compatibility of the shared rules and understandings that underlie their strategies with those associated with interviews. Critical of existing paradigms of interviewing, which he sees as deriving from Western 'folk' theories of reality and communication, Briggs shows that the development of more sophisticated interviewing methodologies requires further research into interviewing itself. Briggs's conclusions provide a basis for the reexamination of current uses of interviews in a wide range of contexts - from social science research to job applications, welfare and health care delivery, criminal and legal investigations, journalism and broadcasting, and other areas of everyday life. His book will appeal to linguists, sociologists, anthropologists, historians, psychologists, as well as other readers whose research or professional activities depend on the use of interviews.