The Growth and Collapse of Pacific Island Societies: Archaeological and Demographic Perspectives 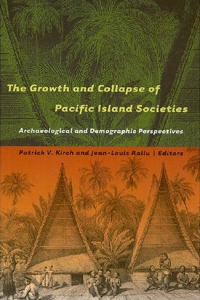 The Growth and Collapse of Pacific Island Societies: Archaeological and Demographic Perspectives

Were there major population collapses on Pacific Islands following first contact with the West? If so, what were the actual population numbers for islands such as Hawai‘i, Tahiti, or New Caledonia? Is it possible to develop new methods for tracking the long-term histories of island populations? These and related questions are at the heart of this new book, which draws together cutting-edge research by archaeologists, ethnographers, and demographers.

In their accounts of exploration, early European voyagers in the Pacific frequently described the teeming populations they encountered on island after island. Yet missionary censuses and later nineteenth-century records often indicate much smaller populations on Pacific Islands, leading many scholars to debunk the explorers’ figures as romantic exaggerations. Recently, the debate over the indigenous populations of the Pacific has intensified, and this book addresses the problem from new perspectives.

Rather than rehash old data and arguments about the validity of explorers’ or missionaries’ accounts, the contributors to this volume offer a series of case studies grounded in new empirical data derived from original archaeological fieldwork and from archival historical research. Case studies are presented for the Hawaiian Islands, Mo‘orea, the Marquesas, Tonga, Samoa, the Tokelau Islands, New Caledonia, Aneityum (Vanuatu), and Kosrae.